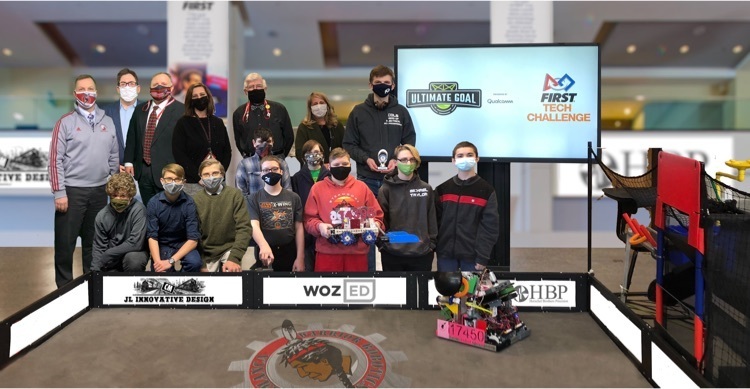 FIRST Tech Challenge (FTC), formerly known as FIRST Vex Challenge, is an international robotics competition for students in grades 7–12. Students compete head-to-head, by designing, building, and programming a robot against other teams.

"Over the last several decades, the industrial economy has shifted from a business model built on repetition and partitions to a system economy,  driven by information, application of knowledge and innovation," said STEAM Coordinator Aaron Straus. "Through competitions such as First Robotics,  students can gain a better understanding of how to manage projects and to gauge and structure innovation collaboratively."

The Excelsior Qualifier Championship, hosted by Monroe Valley Community College in Central New York, draws from 23 individual school teams.  The Warrior robotics crew sought one of the top spots to advance to the state and national competitions.   Salamanca tallied six matches in the qualification round to become the top seed going into the semi-finals, where Salamanca earned the best design award and will move on to nationals in late Spring.

Our district is one of the movers and shakers in the STEAM Robotics Platform, said superintendent Robert Breidenstein. "The team's creativity, ingenuity, and technical skills have been instrumental in their continued success,"

The STEAM programs–aptly named Rapid Unscheduled Disassembly (RUD) or  Warrior Robotics – were started by Salamanca High School Science teacher Cheryl Johnson at the beginning of the 2017-18 school year.  In 2018, the program took home the Rookie Seed Award for its innovative robot design at the FRC Championship, FTC's "bigger brother." The following year, the team attended the international competition in Quebec City and was awarded the Creativity Award for their innovative "targeting and drive base design."  "We've been slowly building our program for the last four years," said Johnson. "There have been baby steps, giant leaps, and of course some opportunities for learning,” added Robotics class teacher, Kim Dry, who facilitates the combined Vex/First/Arduino robotics class elective during the school day.

This year, Salamanca used fabricated and custom parts to build their FTC robot. Salamanca High School partnered with team sponsor Horschell Brother Precision, which provided stock aluminum materials and blank bevel gears.   The team then produced the rest of their designs on machines in the High School's STEAM Center, which opened shortly before COVID. "Due to COVID-19 and limited virtual resources and time in building space, we had to get creative with this year, said Johnson."

According to students, the competition inevitably brought other, unexpected challenges, but that experience helps to hone engineering skills.

"With only a few weeks to build robotic creations featuring varying degrees of automation - including a mechanism to pick up and aim an object- anything could go wrong," said robotics president and senior Connor Klute, "so we guided the team through the Design Engineering Process."

"What is particularly impressive is how the veteran robotic team members have assumed an additional role of mentors to the next generation of robotic warriors," said Breidenstein.

"You have to make many mistakes to arrive at an answer," said robotics freshman Drake Terhune." For example, while we were trying to pick up materials with the robot's mechanical "scoop,”  we found that the motor did not have enough torque. Torque is the "moving force" that can cause an object to rotate about an axis, or in this case, pick up an ovoid material.   We tested a dual-motor setup of their design, which we proposed would address the issue of torque.”

"This was hard at first because, in general, the school teaches students how to get the right answer in school," said high school Sophomore, Mitchell Schanufer "but robotics engineering does not have a right answer but rather solutions.  And it is our job to create one."

To learn more about Salamanca Schools, you can visit their website at www.salamancany.org.

To learn more about the First Robotics Competitions, you can visit https://www.firstinspires.org/