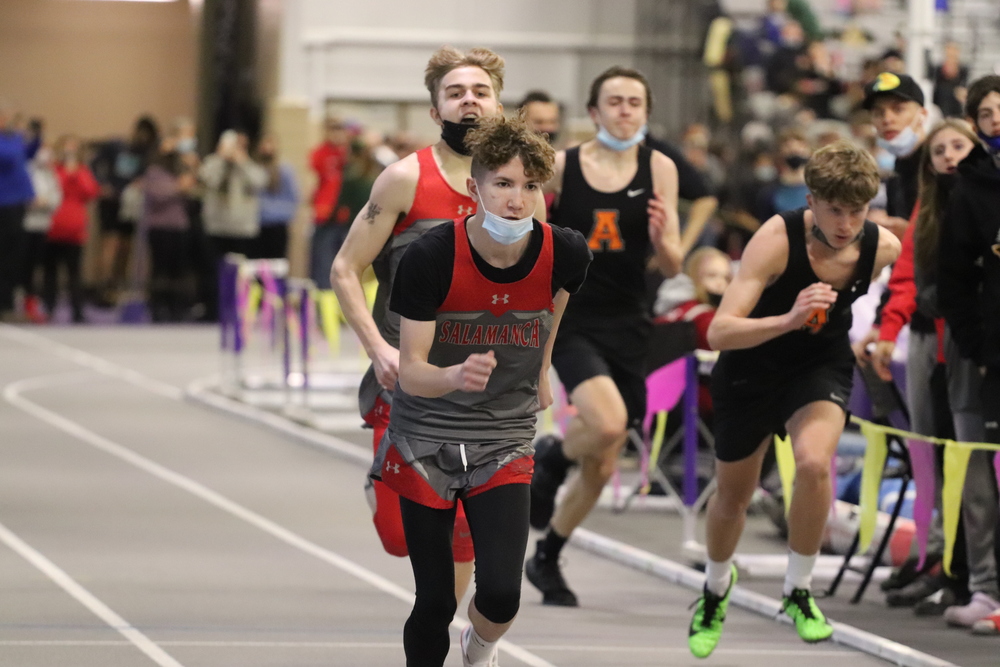 Salamanca was well represented at the Section VI State Qualifier meet in their inaugural season for indoor track and field. At this meet, schools are not broken up into division I and II, and they are not separated by small, medium and large schools like the previous weekend.

The relay team earned 6th place overall. It was a season of many firsts and PRs, and we are extremely proud of the group of young men and women that we had for Salamanca’s first year of indoor track. We look forward to many seasons to come!

On the girls side, Jillian Rae was the only individual girl who qualified for this event in the shotput. Its been a challenge to fine tune the technical aspects of this event with Jill as she doubled with Basketball but she had a great season. Today was not her best performance finishing 10th overall but the journey that got her here was rewarding and I hope spurs her confidence going into the outdoor season.

Our 4 x 800 relay of Ryanna Brady, Aliyah Lee, Sierra Haynoski and Harley Brown exceeded my expectations in their performance today. They went in 12th and moved up to 11th with shaving 40 seconds off their time and setting a new school record. These young ladies are some of best students we have academically and work equally as hard at training. It will be nice to have a few weeks of recovery before we begin out outdoor season.

This entire season has been the seasons of firsts. Seeing the interest that has ignited in some new student athletes that had never experienced track and field before has been so awesome. Its like getting bit by the bug. Once you experience the unique competition that is required in out sport vs a team sport it really takes kids to a new level in their confidence.