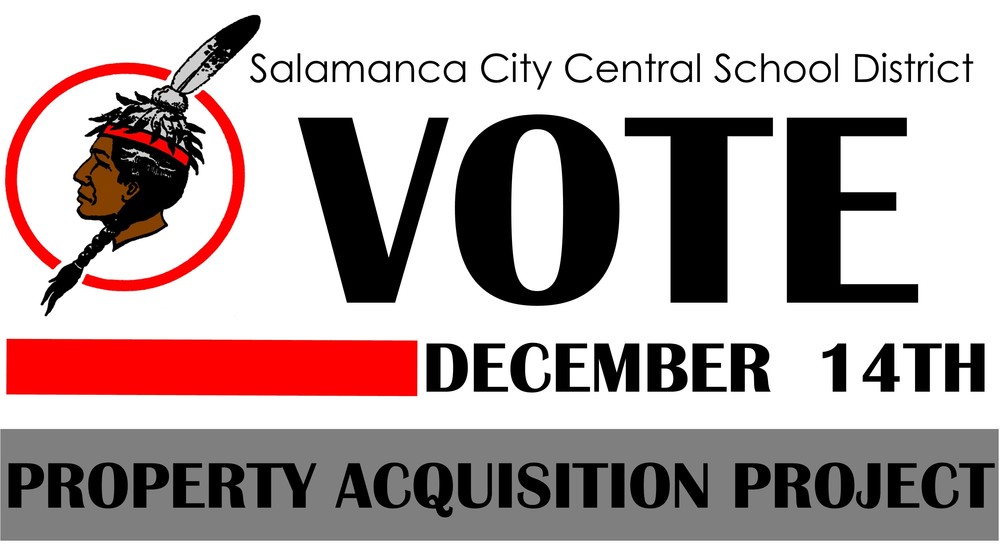 The Special Meeting and Vote will be held on Tuesday, December 14, 2021 in the High School Gymnasium from 12 Noon to 9 p.m. Proposition on the ballot will be:

PROPOSITION NO. 1 –ACQUISITION OF CERTAIN PARCELS OF REAL PROPERTY

Shall the following resolution be adopted, to wit:

A qualified voter must be a United States Citizen, at least 18 years old, a district resident for thirty days immediately to the date of the election, with their current address either correctly filed at the Cattaraugus County Board of Election in Little Valley, or documented on the Seneca Nation Tribal Roll. Native Americans who are properly registered and residing on the Allegany Reservation in the Steamburg or Coldspring area, for a period of thirty days preceding the election, which is located outside of such city school district, are eligible to vote in this School District’s Special Meeting and Vote.

The Salamanca City Central School District Board of Education has announced availability of absentee ballots for the special school district vote to be held on Dec. 14.

The requirements are as follows:

1. The applicant must be over 18, a registered voter and a qualified voter of the school district.

2. The applicant must be unable to vote in person on the day of the election for reasons such as:

3. Application forms may be obtained from the School District Clerk during business hours 8 a.m. to 3:30 p.m. Monday through Friday or call 945-2403 for one to be mailed.

5. Absentee voter’s ballot must be received by the school district clerk no later than 5 p.m. Dec. 14.

If there are any questions, please call the school district clerk at 945-2403.