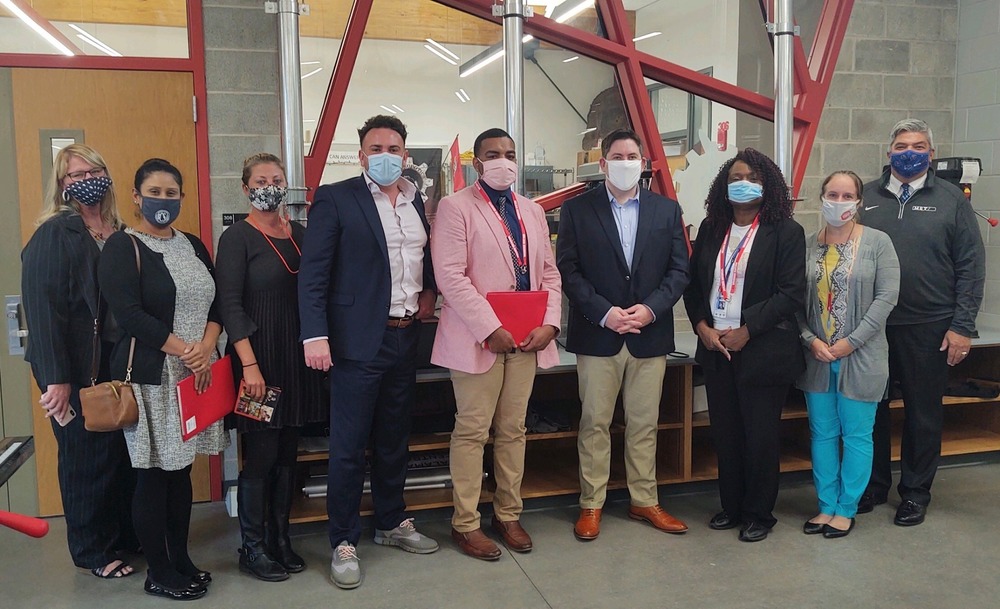 Over the past decade, Salamanca City School District has pioneered numerous educational initiatives, which helped spur replication and innovation in other districts across Western New York. This year Salamanca has served as a catalyst for yet another exciting development in educational circles: The pathway of STEAM programming.

Several WNY districts, including Lockport City Schools, North Tonawanda Schools, and Buffalo Public Schools, visited Salamanca to learn more about the award-winning program. “The Salamanca City Central School District has taken its national title as a School of Excellence seriously and is happy to share our story and pathway with others,” Salamanca District Superintendent Robert Breidenstein said.

Buffalo Public Schools (BPS), a district that maintains 67 schools and serves over 34,000 pupils, was excited to visit its rural cousin. “Salamanca has achieved much in a very short time using STEM,” said Buffalo Board of Education President, Sharon Belton-Cotman. “We hope to model their success.”

Focused on learning about the STEM curriculum and new educational strategies utilized at Salamanca STEAM Academy, 19 BPS principals and teachers, along with several district administrators, observed how the school approaches STEAM instruction, how the school is outfitted technologically and spoke with some of the teachers about their experiences and practices.

Beehler explained to BPS administrators how STEAM came to fruition in the district.  “At the time our schools began looking at a new capital project, the district decided to change its tactics on how and what students would learn.  A portion of that plan involved heavy investment in science, technology, engineering, art, and mathematics, or STEAM education,” he said. “That’s because it involves all disciplines to the creation of a better world and fosters transferable skills valuable to nearly every career path.”

According to Beehler, Salamanca Schools went from a school with declining enrollment and 59% graduation rates to NYS good standing, 92% graduation, and national awards for STEM excellence.  “STEAM is not the silver bullet for educational excellence but it certainly did make a difference,” he said.

Classes at Salamanca STEAM Academy combine science, engineering, math, and coding, and many lessons focus on hands-on projects and experiments. As the Buffalo Public School administrators worked their way through the K-12 program, they were treated to live drone workshops, First Robotic demonstrations and looked at many of the grant-funded high-tech equipment like Resin 3D Printers, Industrial Simulation Robots, Soldering Stations and Wood & Welding Shops.

The BPS delegates then had the opportunity to engage with students and teachers. There was a question-and-answer segment, where BPS educators were able to speak with teachers and students about the understanding of rigorous concepts, as well as the overall STEM curriculum.

“Robotics has allowed me to gain experience and confidence in many areas of my life,” said STEAM Robotics student, Connor Klute. “I’m more confident in presenting to my peers, younger students, and adults. I’ve had to learn how to communicate ideas, help students conclude, and present to the public.”

“From a teaching perspective, STEAM is changing everything,” said 8th grade Science & Robotics teacher, Cheryl Johnson, as she helped BPS Principal Marquita Bryant take an adventurous seat on the student designed, FRC robot. “Previously, teachers in my field would follow along with a Science curriculum on a given subject. But now I’m working to combine the Next Generation Science Standards with Social Studies and Technology class happening next to the Science room or down the hall. That’s not typical for a test year Science teacher, in a city school district, but it helps student learning.”

BPS learned about the pathway and drone curriculum the district uses, as they enjoyed an introduction to drone lessons district fourth grade students experience in STEAM class.

“It was frightening at first but then I got the hang of it,” said one teacher as her drone completed a 360-degree flip through the air.

BPS Board of Education president, Sharon Belton-Cotman, gave insight into what is to come for BPS regarding this meeting with Salamanca.

“Our trip to Salamanca was informative, stimulating, encouraging, and inspirational," she said.  "The faculty and the Native America ambience made us all feel welcome.  BPS looks forward to future collaborations with the Salamanca School District and we hope to model Salamanca’s success.”