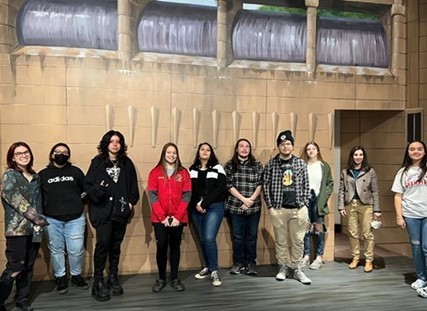 Last week, a group of self-selected 10th-12th grade students attended a two day writer’s workshop at Seneca-Iroquois National Museum.  Nicole Eustace, a professor of history at New York University, author of three books and a finalist for National Book Award in 2021, guided students on a journey of discovering and writing history through an object.

On the second day, students brought in their own object, did research about its origins, and connected that to the sometimes deeply personal memories that the object held for them.  All the students took the assignment to heart and produced impressive narratives in a short time.

One student chose a sweater that belonged to her recently passed grandmother.  After some historical background on the origin and meaning of sweaters, she wrote

“. . . Sweaters are not traditionally Seneca, but the idea that they keep us safe has its similarities. When my grandmother was a young girl, the Kinzua Dam flooded the community she had lived in, and she was thus forced to relocate. I often heard stories of the general store she used to go to and how she missed going there with her grandma. I may not be able to connect the sweater with her memory of the store, but I do know that she aspired to be like her grandma in a way where family felt like home instead of a physical place…”

Thanks to the work of the students and with the help of Professor Eustace, the workshop had a greater impact than anyone expected.

Nya:wëh to all those who helped and especially to the phenomenal Salamanca students who took part.